The first update of the mid-size SUV is bringing the Grand Highlander. This is going to be an even larger SUV but still positioned under Sequoia. The company is probably trying to provide more space for passengers in the third row since this is one of the rare downsides. Expectations from the 2023 Toyota Highlander are very high and the SUV should remain one of the best-selling models in the segment.

For a long time, this was the only three-row SUV with a hybrid drivetrain. Now, more vehicles are available. But, the Highlander is still a step ahead. No other model with a similar size can return 35 miles per gallon. Plus, the carmaker is considering the 2023 Toyota Highlander Prime – a plug-in hybrid configuration with enhanced power and mpg numbers. Fans are already praising the Rav4 Prime.

The new Highlander will be out next season. The new generation is not on the schedule yet. 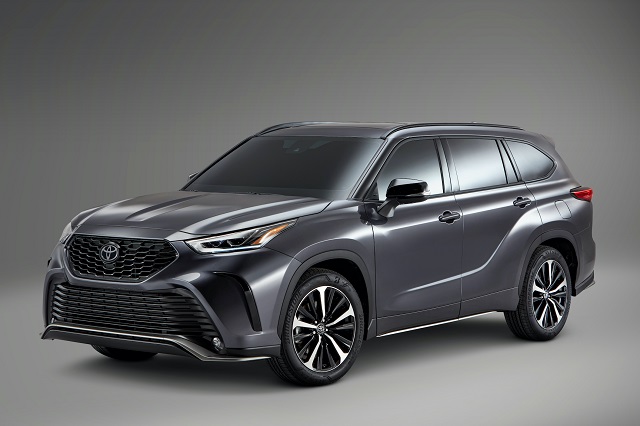 The new drivetrain option for the upcoming SUV will be the plug-in hybrid. It is a logical step in the evolution, after a huge success of the standard hybrid. The 2023 Toyota Highlander Prime is going to boost power outputs. After the last update, the Japanese company sacrificed more than 60 ponies to gain extra mileage. Now, the PHEV is about to restore the power. Just the comparison – the Highlander hybrid is now producing 254 hp, while the Rav4 Prime is delivering 302 ponies. So, if the same recipe is going to be used, the 2023 Highlander PHEV might be there with 350-400 horsepower.

The outputs will depend on the base petrol unit. The same 2.5-liter four-banger will be under the hood of the plug-in hybrid. Experts don’t believe a V6 is about to replace it, especially for the Highlander Prime. However, don’t be surprised if Toyota decides to shake things up. 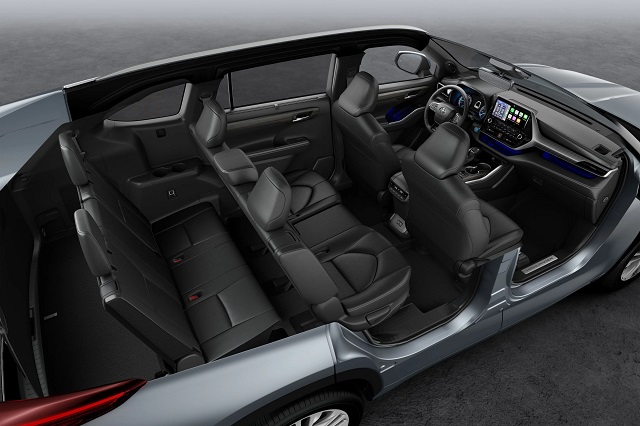 The base choice for the 2023 Toyota Highlander remains a 3.5-liter V6. Engineers dropped a four-pot unit, while a turbo-four is still available in some markets. Anyway, the six-cylinder engine is going to deliver 295 hp and 265 pound-feet of torque. That is enough to tow up to 5,000 pounds. The gas mileage is at the competitive level, with 24 mpg combined. All-wheel drive is optional, and this system is not consuming too much more gasoline. An eight-pace automatic transmission is a power router.

The secondary option is the 2023 Toyota Highlander Hybrid. Previously, the mid-size SUV used to combine an electric battery with a V6. Now, a 2.5-liter is the center of the system. Total outputs are 243 hp, 65 fewer than the last hybrid. But, the new edition is returning 35/34 mpg, which is way more than its predecessor. All-wheel drive and CVT transmission are standard.

The new model for the upcoming season is on the horizon. The carmaker is developing a larger SUV that can offer more space in back rows. The 2023 Toyota Highlander is not increasing the number of seats though. It is still a seven-seater. There might be an option to turn a standard Highlander to a two-row SUV. But, it would create competition for the new Venza. The official statement is still unavailable. All we know is that Toyota filed for the registration of the nameplate. The SUV will be out when the USPTO gives a green light.

The new 2023 Toyota Highlander is coming late next year. More details will be available once we enter 2022. The competition is tough, so the Japanese carmaker is trying to make all its vehicles as versatile as possible. Toyota covered all classes in the SUV category and the Grand Highlander is a totally new tier. Alternatives with three rows of seats are Ford Explorer, Hyundai Palisade, Nissan Pathfinder, or Chevy Traverse. If you want to go premium, Lexus RX is using the same drivetrain as the Highlander. Acura MDX, Lincoln Aviator, and German three-row luxury SUVs are great options.