Luxury SUVs are in demand nowadays. Those vehicles are combining utility with practicality, with a higher dose of premium elements. So, one option is to buy a regular SUV and spend a lot more for particular upgrades… or just splash the money and invest in some of the proven brands.

There are plenty of luxury SUVs out there. Here is our selection of top 10 models for the upcoming season. 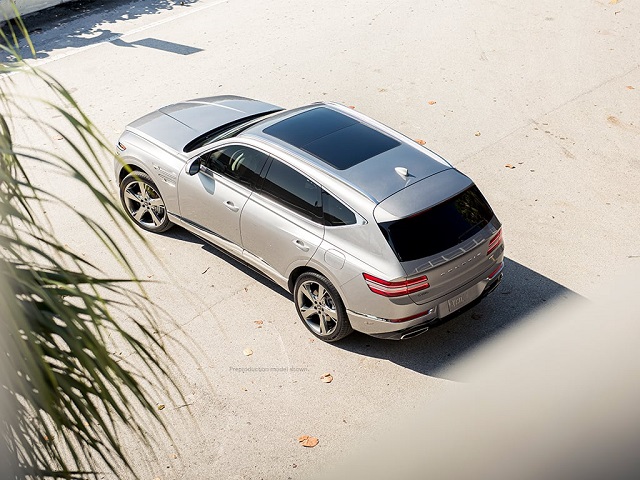 It is a new name in the luxury SUV world, but Genesis made an immediate impact. It is a premium branch of the Hyundai, so the GV80 had a good base for upgrades. Like always, the Korean company is offering more than others, at lower prices. Still, the 2023 Genesis GV80 can’t compete with high-end versions of German and British SUVs. But, if your standards are not too high, this vehicle will meet them.

Some of the best things about the 2023 Genesis GV80: it will be very safe, the engine surprised everyone with the performance, and the interior is very elegant. On the other hand, there is only one engine under the hood. To be more competitive, the GV80 must add a kind of hybrid unit. Plus, the third row is optional. By picking this upgrade, the comfort is under a question mark, especially for passengers in the third row. The price range of the 2023 Genesis GV80 is from $50,000 to $75,000.

The all-new 2023 Lexus LX 600 is definitely one of the stars of the upcoming seasons. Toyota made a bold move by cutting the Land Cruiser from the US market to provide more room for the LX. So, if the Japanese giant believes in this SUV, then we must too. There are plenty of reasons why the full-size model is so highly anticipated. The LX was already one of the most luxurious SUVs in the market. Now, the styling is new, it has a version with three rows, and more options are added.

But, atop of all, the new engine is under the hood of the 2023 Lexus LX 600. Like many experts predicted, Toyota wanted to improve its efficiency. An old V8 was powerful, reliable, and durable unit, but also very thirsty. Frequent visits to gas stations are annoying. Now, the I-Force Max is there. A twin-turbo V6 replaces an eight-pot engine and brings better gas mileage, as well as higher outputs. Still, we will see if V6 can keep the off-road driving abilities of its predecessor at the same level. Of course, the pricing of the new LX model is updated. Now, the base MSRP is just under $90,000. 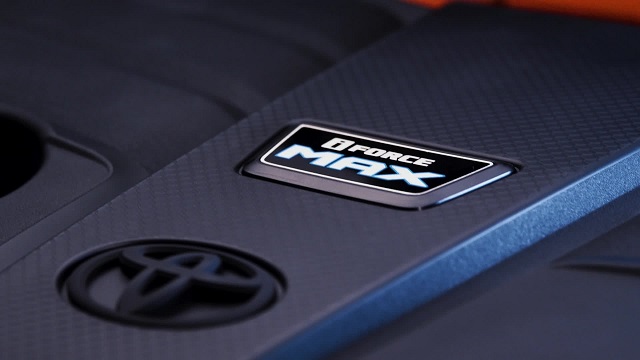 The most popular model in the full-size premium SUV segment, according to sales charts, is Cadillac Escalade. The company recently updated the luxury vehicle, so there is no surprise why this model tops others. A mighty V8 engine is under the hood, it provides plenty of space in all three rows, and the infotainment system is stunning. Plus, it comes in the ESV version with a long wheelbase.

But, what really is going to make the SUV so special next year is the 2023 Cadillac Escalade V model. A high-output version of the vehicle is on the way and engineers are going to boost a 6.2-liter V8 engine. Superchargers and other tuning are squeezing the maximum from the plant, so the power outputs can be around 650 hp. On the other hand, the price of this configuration will be close to $150,000, making it one of the most expensive luxury SUVs on the list.

One of the vehicles that can cost more than the Escalade V is the 2023 Mercedes GLS. Well, you will have to pack it with the top of the lineup options, including the AMG bundle. Or, if you are really after a super-luxurious and unique model, be quick to purchase the 2023 Mercedes-Maybach GLS 600 version, which will be available as the limited edition. Prepare $160,000 for this one, or $135,000 for the AMG GLS 63 if you want to save some cash. It is still a great option with 603 hp and 627 lb-ft of torque.

The versatility of the lineup is what makes the 2023 Mercedes GLS so special. The base price might attract you. Buying such a big Mercedes under $80k seems like a bargain. But, that is the package with a six-cylinder engine. If you want a V8, those configurations are already in a six-digit price range. AMG is the top model until Maybach made the GLS even more luxurious. 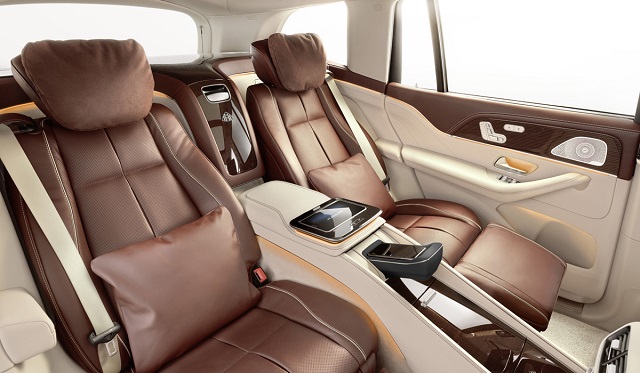 Of course, there is another German carmaker that will build one of the best 2023 luxury SUVs. Out pick from Bavaria is the 2023 BMW X6. The coupe-SUV is attractive and powerful. It makes a statement. Yes, the X5 is the flagship model, and the X7 is bigger and new, but the design of the X6 is what draws buyers. Also, it is more expensive thanks to various upgrades. Compared to mentioned SUVs, the 2023 BMW X6 is not offering the third row because of the sloped roof. That will also harm the cargo space. But, buyers of this vehicle won’t care.

All the versions of the 2023 BMW X6 are using the xDrive AWD system. Like Mercedes, the Bavarian manufacturer made a maneuver with a six-cylinder engine. The base configuration costs less but delivers only 335 hp. A 4.4-liter V8 is the engine you want under the bonnet of your vehicle. It costs $20,000, but it’s worth. In case you don’t want further upgrades, the system creates 525 hp. With the M Performance package, the outputs climb to 600 ponies. But, that is not all – there is the ultimate Competition package that squeezes 15 more hp from the V8 engine.

It was already one of the most popular SUVs in the market. Now, with the Type S package, the MDX is even more competitive. We were waiting for this package to arrive for quite long. Acura brought it for its TLX sedan first, and it didn’t take too much before Type S became an optional upgrade for the flagship SUV. Enhances of performance and styling are accepted and now we can talk about the 2023 Acura MDX Type S as one of the best luxury SUVs for next season.

The base version is equipped with a V6 engine. It is not special compared to the competition. The Super-Handling all-wheel drive is a recommendable upgrade and one of the best AWD systems in the market. But, the SUV needed something else. Experts believed that the hybrid version can fix the situation. Instead, the 2023 Acura MDX Type S jumped in and stole the show. A 3.0-liter engine is turbocharged and sends power through a 10-speed auto transmission (355 hp and 354 lb-ft). The price of the SUV with the Type S package is $68,000. 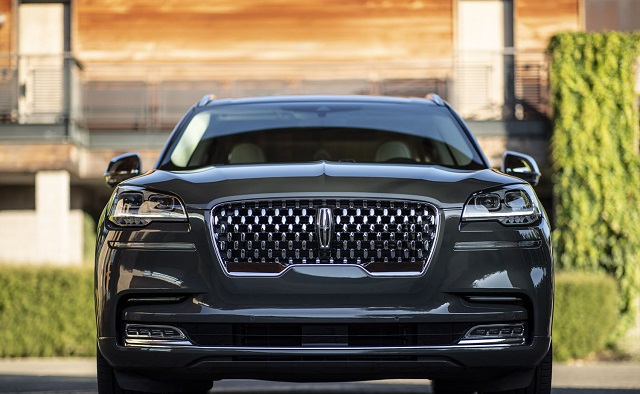 The 2023 Lincoln Aviator before Navigator? Yes, and here is why… The company is preparing an update for the mid-size luxury SUV. It can bring new themes for the Black Label. Plus, the plug-in hybrid configuration available with the Grand Touring version is delivering 494 hp and 630 lb-ft of torque, which is more than Navigator can do. Well, the full-size SUV needs upgrades as well. Its main rival, Cadillac Escalade, will be out soon with the V-Performance package. Until something big happens to the flagship vehicle, Aviator stays the No1 SUV in the family.

So, the main configuration of the mid-size model is a turbocharged V6 engine that cracks 400 hp. Not bad. But, it becomes even more impressive when the same engine gets support by a plug-in hybrid system and increases outputs to nearly 500 ponies. It is not all. The PHEV engine can be combined with the most luxurious package available for Lincoln vehicles – Black Label. Unique interior themes are available, but the price jumps to $90,000.

Comparing the 2023 Lexus RX to the rest of the models on this list, we would say there is nothing special to add about this SUV. But, it is still the best-selling premium vehicle in the US. The versatility is a key – the RX is available with standard engine and hybrid, base layout and extended version, classic appearance and aggressive stance brought by the F Sport package. Plus, the price of the base model is still under $50,000 and the redesign might happen already in 2023.

We already highlighted the best things about the 2023 Lexus RX. A power output goes from 290 hp with the standard setup and up to 310 hp if you select the RX 450h hybrid. The SUV is a two-row model, but it becomes a seven-seater with the RX 350L version. It is also possible to combine a hybrid engine with an extended body. The F Sport enhances the appearance of the SUV, making it more attractive with a unique grille and darkened details.

Volvo is one of our favorite automotive companies. Whatever the Swedish manufacturer brings, stuns the market every time. There are plenty of novelties and future concepts we can talk about. The XC100 might become the flagship SUV, and the Recharge package is something special about the 2023 Volvo XC90 and other vehicles that recently got it. It is not a model with an all-electric drivetrain yet, but in the foreseeable future, the carmaker will do it with most vehicles in its portfolio.

For now, the same 2.0-liter is under the hood of the 2023 Volvo XC90. With the Recharge PHEV package, the outputs rise to 400 hp and 480 lb-ft. The carmaker is not going to use a larger displacement. Instead, they are developing cleaner sources of power. And of course, safety is the top priority. Driving Volvo brings peace of mind.

Well, for the finale, we left an exotic vehicle. Its starting price is above every other SUV on this list. But, the 2023 Lamborghini Urus will take you to another dimension of luxury. Everything in this vehicle is special, and the price indicates that. But, let’s look at the specs sheet. The Urus is going to use a mighty 4.0-liter V8 tuned to deliver 650 hp. Of course, AWD is standard. Max speed of the SUV is 189 mph and it sprints 0-60 mph in just 3.5 seconds.

Lamborghini made a bold move by delivering Urus, their first four-door vehicle. Plus, it was a challenge for other builders of exotic cars. Next year, Ferrari is launching the Purosangue SUV. It will change the market, although not too many buyers can afford such vehicles. But, the presence of companies such as Lamborghini and Ferrari is noteworthy.