Top 2023 Hybrid SUVs – Everything You Need to Know

Hybrid SUVs are taking over the market. Such configurations are offering electric support to the base petrol engines, which become more efficient, creating more power and improving gas mileage. If you are worried about the price – the technology is evolving and the costs of those systems are lower nowadays. 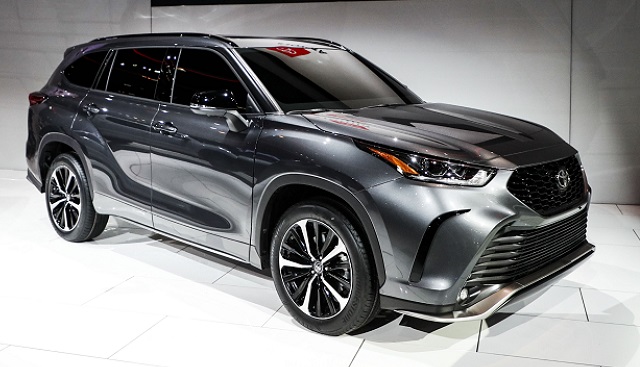 For some while, Highlander was the only hybrid SUV in the market (we don’t count small crossovers). It is probably still the best deal in the market. The 2023 Toyota Highlander Hybrid is going to return 35 mpg. Only compact crossovers can do a similar mileage. That makes the Japanese market a step ahead of the competition, again.

The base price of the 2023 Toyota Highlander Hybrid will be $39,000, and you can find it XLE, Bronze, Limited, and Platinum editions. The last one costs $50,000. There is no TRD version with a hybrid drivetrain. A four-cylinder engine is under the hood. With a help of an electric motor, the system can crack 265 hp. In the future, the SUV is about to get a plug-in variant.

After standard SUV, the Grand Highlander could get a hybrid version as well.

Ford never gives up. The US company is not going to leave the market to Toyota, or any other carmaker. The 2023 Ford Explorer Hybrid is proof of ambitions. The Blue Oval manufacturer is still at the level of the previous Highlander. But, it is a good start. The system is combining a V6 engine and an electric motor to produce 318 hp and 322 lb-ft of torque. More important, the SUV returns 27/28 mpg.

The 2023 Ford Explorer Hybrid is available only with the Platinum package. It is a higher version from the King Ranch. The Platinum bundle includes adaptive headlights, automatic parking, premium leather seats and large 21-inch wheels. The price of the Explorer Hybrid is around $55,000. For an all-wheel drive, you must add $2,000. The interior is available in black and sandstone color. 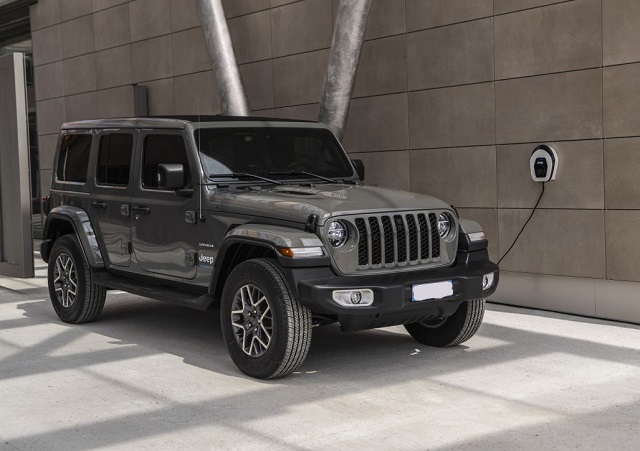 The 2023 Jeep Wrangler 4xe is a plug-in hybrid. The off-road specialist introduced a new version of a drivetrain and it was a surprise. The company used a turbo-four engine as the base for the plug-in hybrid system. The configuration provides 375 horsepower and 470 lb-ft of torque. It should be enough for off-road adventures. Still, on the road, the Wrangler 4xe is a real performer. It can sprint 0-60 mph in 6 seconds.

Thanks to the electric motor, the SUV can be driven solely on this source of power. It can cover 22 miles. The combined range is 370 miles. The price of this system is $52,500 if you take the Sahara model. Rubicon is an off-road specialist and costs $4,000 more. The top of the class version is High Altitude. The next step of evolution is close. Wrangler is getting an all-electric version, called Magneto.

The RX is the best-selling luxury SUV. Its versatility and wide range are the main reasons. We can also add durability and reliability. One of the models in the lineup will be the 2023 Lexus RX 450h, powered by a hybrid drivetrain. It uses the same unit as the base configuration, a 3.5-liter V6. Since Lexus is owned by Toyota, some expected the switch to a four-pot mill, like engineers did for the Highlander. But, in the premium segment, everything counts, and Lexus RX couldn’t sacrifice power to get better in the fuel economy.

The 2023 Lexus RX 450h is a two-row SUV. You can add the third row and that is the RX 450hL model. The F Sport package is also an option, for a more aggressive appearance and better driving experience. The system returns 31 mpg in the city and 28 miles per gallon on highways. The pricing starts just under $50,000. Both F Sport and three-row upgrades will cost buyers $3,500. 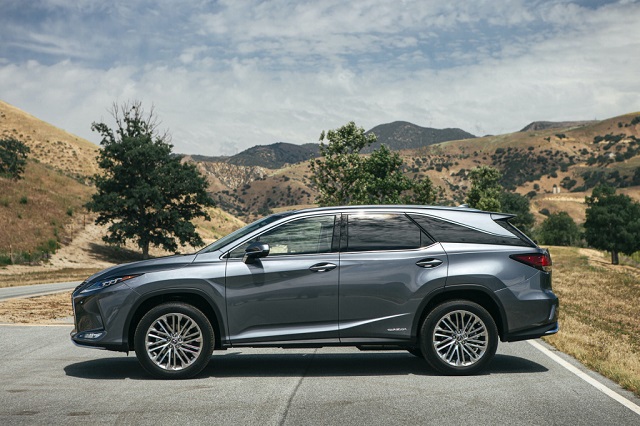 Volvo launched the Recharge version of the subcompact XC40. It is an all-electric model with impressive numbers. Then, the Swedish company started using the package for its larger siblings. But, for the 2023 Volvo XC90 Recharge and XC60 Recharge, this badge replaced an old T8. It is the PHEV system with plenty of power.

A 2.0-liter engine is under the hood. Combined with the electric source of power, the system cranks out 400 hp and 480 lb-ft of torque. The 2023 Volvo XC90 Recharge can return 27 mpg combined, which is excellent output having in mind a total power. The base MSRP is $65,000 for the Inscription package. The R-Design is a $6,000 upgrade. A seven-seat interior is standard, but you can cut down one spot by replacing the bench in the second row with captain’s chairs.

Read also: Volvo is preparing the launch of the new flagship SUV – the XC100

The most powerful SUV on our list. The 2023 Porsche Cayenne Turbo S E-Hybrid is ready to produce 670 horsepower from a 4.0-liter twin-turbo V8 engine combined with an electric drivetrain. The system also delivers 660 lb-ft of torque. Although electrified, the Cayenne is not going to impress you with the gas mileage. High outputs limit it to 18 mpg. All-wheel drive is included. The price is also among the highest in this list, with a $170,000 tag hanging from the Turbo S E-Hybrid model.

There is also a standard edition. The 2023 Porsche Cayenne E-Hybrid is using a V6 engine and bursts 455 hp with 515 lb-ft of torque. The fuel economy is slightly better with 21 mpg. Also, the savings in price are nearly 50 percent. Both Cayenne E-Hybrid and Cayenne Turbo S E-Hybrid are available with the standard chassis and in a coupe version. With 670 horsepower, the SUV will need only 3.1 seconds for a 0-60 mph sprint. 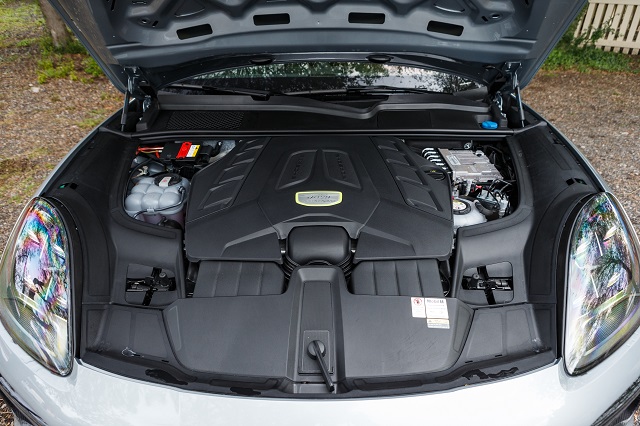 Like Toyota, Ford enhanced its premium SUV with a more powerful hybrid version. But, Lexus kept a good gas mileage, and the 2023 Lincoln Aviator Grand Touring is going all-in with a powerful drivetrain. A 3.0-liter V6 engine gets help to produce 494 hp. Those numbers can’t promise exceptional fuel economy. Gas only, that would be 23 mpg.

The 2023 Lincoln Aviator Grand Touring is the only package available for the plug-in hybrid system. Besides nearly 500 hp, the SUV also delivers 630 lb-ft of torque. The towing capacity is 5,600 lbs. The Grand Touring also offers an upgrade – the Black Label trim. The base hybrid will cost just under $70,000 with destination fees. The Black Label is a $20k upgrade. Themes available for the Aviator are Chalet, Flight and Destination.

It is not drawing more attention than the M model, but the 2023 BMW X5 xDrive45e is still one of the most anticipated members of the lineup. A 3.0-liter engine is backed up by an electric motor. Together, the system cracks out 390 hp and 330 lb-ft of twist. The gas mileage is not impressive, with only 30 mpg. Of course, the xDrive marks an all-wheel drive system. Since the X5 is now a plug-in hybrid, you can use the only electric unit for driving the SUV. The range is 31 miles.

If you want more power, you will have to pick an SUV with a V8 engine. In that case, the output jumps to 523 hp. The 2023 BMW X5 xDrive45e costs from $64,000. The M Sport package is also available. White and black are standard colors, while every other paintjob costs extra. The base package includes a set of 19-inch wheels, but you can order 20- or 21-inchers. Optional packages are Premium, Executive, Driver Assistance, Luxury Seating, Parking, and Climate Comfort. 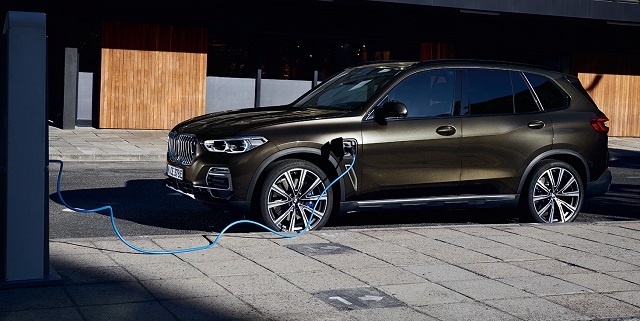 The 2023 Acura MDX Sport Hybrid SH-AWD is going to be one of the SUVs most fun to drive. The vehicle is using the Super Handling all-wheel drive (SH-AWD). Acura did a great job with this model and of course, it will be added to the hybrid variant. The package includes a 3.0-liter engine and electric support with 320 hp total. The system makes 27 mpg combined, which is way better than 21 mpg by the standard configuration.

Honda, owner of Acura brand, is preparing the new Pilot Hybrid as well.

The Sorento Hybrid is the latest innovation by Kia. Since it is an all-new model, we won’t see changes in 2023. The system combines a 1.6-liter turbo-four petrol unit and it outputs 227 hp and 258 lb-ft of torque. Definitely, the big three-row SUV needs more power. Also, all-wheel drive is optional. A good thing – the 2023 Kia Sorento Hybrid will cost under $35,000 in the base form.

Nevertheless, you can make the SUV better. The plug-in hybrid version enhances the power to 260 ponies. The vehicle is available in the SX and SX Prestige trims. Standard 2023 Kia Sorento Hybrid offers S and EX. The PHEV system will cost you $10,000 more than the standard hybrid. This system beats Toyota Highlander in the gas mileage race with 37 mpg combined and 39 mpg on the highway. Still, it lacks power, which is pretty important for the three-row SUV. The PHEV covers 32 miles of the electric drive only. 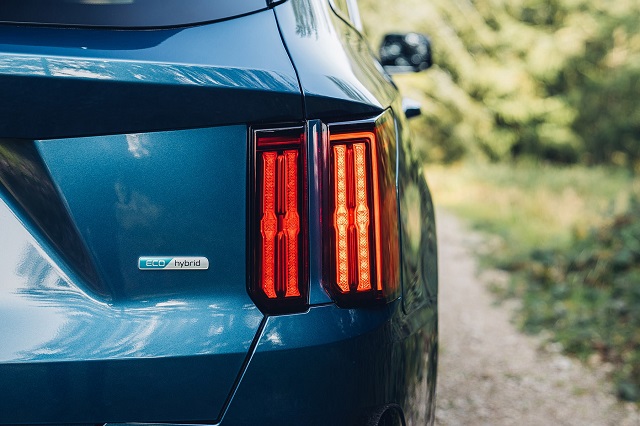 The Range Rover is an all-new vehicle. The company revisited the look, features and drivetrains of the flagship model. The 2023 Range Rover PHEV now delivers 435 horsepower and 405 lb-ft of torque. The combination uses a 3.0-liter turbocharged inline-six petrol engine and all-wheel drive. The full-size SUV can do only 20 mpg combined. The range of the electric unit is pretty impressive, with 52 miles in a single charge.

The price of the 2023 Range Rover PHEV is $105,000. It is too much, but not compared to the rest of the lineup. The base version of the SUV is in the six-digit price realm. The hybrid drivetrain is available only with the standard wheelbase. The Range Rover is also a seven-seater, but there you won’t find the PHEV system. Autobiography and SV models are using the new 4.4-liter V8 powertrain.

Here is a surprise. We know Volkswagen is thinking of the R model for the large SUV, but we didn’t know it is the plug-in hybrid. Well, the 2023 VW Atlas R PHEV is the US version of the Touareg R, the SUV for the European market. The system is good for 460 hp and 515 lb-ft, which suits perfectly the needs of customers in the United States. Well, Volkswagen still needs to confirm the Atlas R.

The German company is in the big electrification process. It might happen that we won’t see the hybrid, but the all-electric SUV is based on the ID concept. Nevertheless, while all the models we mentioned exist, the 2023 VW Atlas R PHEV is still just a rumor. But, since the Touareg R is available in Europe, the closest sibling to Atlas SUV, there is a chance of seeing the hybrid in the US pretty soon. 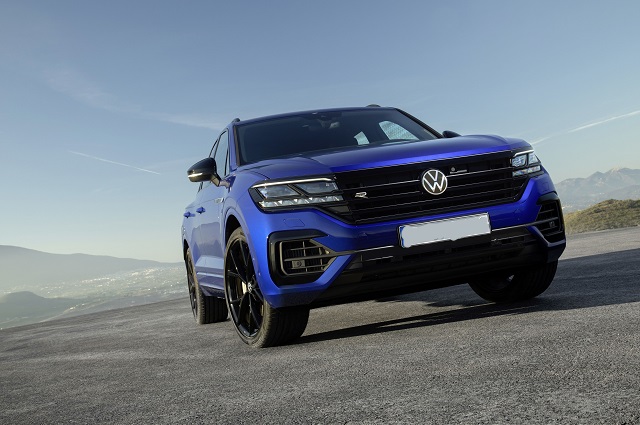 The 2023 Hyundai Santa Fe Hybrid could be one of the most interesting SUVs in the market. Its price is drawing attention since the MSRP starts below $34,000. It is a Blue model with the base options. A 1.6-liter engine is under the hood. It is paired with a couple of electric drivetrains to deliver 225 hp and 190 lb-ft of torque. It is a bit smaller SUV, so the output is nice. When you add 36 mpg in the city, the 2023 Hyundai Santa Fe Hybrid seems to be a good choice.

All-wheel drive is standard all across the lineup. The SEL Premium is a mid-range option with 19-inch wheels, a 10-inch touchscreen, a panoramic roof and a price tag of $38,000. The Limited edition is above $40k and adds remote parking assist and blind-spot monitors. Higher trim levels are going to consume more fuel, 32 mpg combined.