When it comes to comfort and power, no other vehicles are better than full-size SUVs. Those rigs are going to offer a lot of space for passengers and a towing capacity of a pickup truck. On the other hand, the biggest downside is the size, especially when it comes to parking and driving in urban areas.

Those SUVs are not being updated so often. However, in the past couple of years, there were a few debuts of next-gen models. We’ll try to present you the best and worse full-size SUVs for 2023. Here are our thoughts. 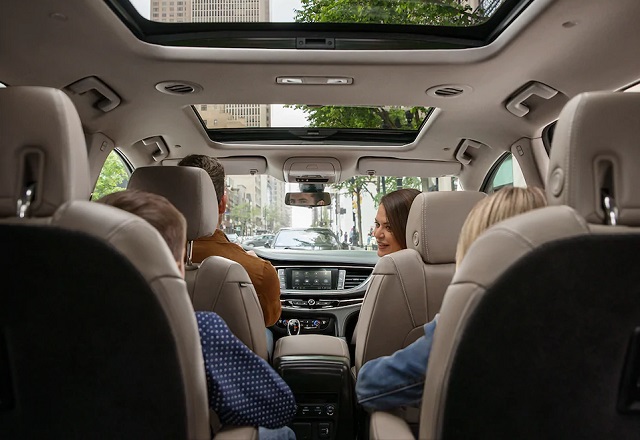 Big, versatile, with plenty of options. This is a classic SUV with a modern design and features. The 2023 GMC Yukon is pretty simple – you can buy base model, the mid-range offer includes SLE and SLT, and then you can pick either premium Denali version or off-road AT4. Further upgrades include the Yukon XL model, with extended body and cargo space of 145 cubic feet.

If you are after a luxury SUV, you can either buy Cadillac Escalade, mechanical twin of Yukon and Chevy Tahoe, or you can select Denali package and save some money. The base MSRP is going to be around $51,000. The company offers a couple of V8 petrol engines, and diesel as an additional option. A 6.2-liter V8 is the most powerful configuration with 420 hp and 460 lb-ft. Oil-burner is good for 277 horsepower and 460 lb-ft of torque.

Tahoe and Suburban are mechanical twins to GMC Yukon. So, there are two V8 engines and a diesel. The 2023 Chevy Tahoe is an entry-level model, while the Suburban is a long-wheelbase SUV with extra space. The most recent update brought the independent rear suspension, replacing an old system. Both 2023 Chevrolet Suburban and Tahoe are going to be more competitive against Ford Expedition, the SUV that uses IRS for a while.

The price of 2023 Tahoe will be above $50,000. High-end versions are going to cost more than $70k. We also recommend one of the most popular configurations – the Redline edition. Suburban is going to offer pretty much the same options. However, extended wheelbase is increasing the price by $2,000. Everything about Tahoe and Suburban is still new. The latest generation of SUVs was expected in 2019, but first delays, and then COVID-19 outburst postponed the release date for 2021. So, in 2023, we won’t see too many changes.

Like in every other segment, GM is battling Ford for the top spot in sales charts. The Expedition is going to be the biggest rival to GMC Yukon and Chevy Tahoe and Suburban. Like its competitors, the SUV comes in base and LWB configurations. The maximum cargo space of the 2023 Ford Expedition Max is ‘only’ 122 cu.ft. The standard-wheelbase offers 105 cubic feet. This model is unique on this list with a V6 as the main source of power. A 3.5-liter twin-turbo configuration is going to offer 400 hp and 450 lb-ft of torque. It is not the maximum this engine can do. Premium sibling, Lincoln Navigator is getting a configuration with 450 hp and 510 lb-ft.

Trim levels of the 2023 Ford Expedition are making the building so fun. The base model is going to cost just above $50,000. Platinum is a luxury package that will increase the price to $80,000 before you add any option. Expedition MAX is going to cost about $5k more. All the options we see on the standard edition are available for the LWB model.

Another big US carmaker is making a debut in the full-size segment. Well, not unexpected, since the FCA doesn’t have to make huge moves. The platform is there since the 2023 Jeep Grand Wagoneer is going to share the body-on-frame architecture with Ram trucks. Grand Cherokee is the best-selling model in its class. So, expectations from the upcoming full-size SUV are high.

So far we know the vehicle is coming. The 2023 Jeep Grand Wagoneer is going to be a premium version of the standard Wagoneer. The manufacturer also doesn’t have to worry about drivetrains. Two V8 powerplants are waiting. A 5.7 and 6.4-liter displacements are certain choices. Optionally, the 2023 Grand Wagoneer might stun the market with the Hellcat engine which produces more than 700 hp. The SUV is going to debut in 2022.

Nissan is updating Armada, and the redesign is going to draw attention. The Japanese company is going strong into the new season, with fresh vehicles all over the lineup. The highlight is the Monograph concept, created for Armada’s luxury sibling, Infiniti QX80. Both SUVs will share the same engine – a 5.6-liter V8. The difference is going to be in the look and features. If you want to spend $30k more, the QX80 becomes a cool option.

A V8 engine is good for 400 hp and 415 lb-ft of torque. The price is competitive, staying under $50,000 even after the redesign. There are a couple of questions surrounding the 2023 Nissan Armada. First – the new drivetrain. Some say a turbocharged V6 might replace an eight-cylinder mill. A kind of hybrid is also a possibility. Fans are asking if a 5.0-liter turbodiesel might be back. Finally, the Warrior concept we saw on the Titan truck, might be implemented in the SUV. 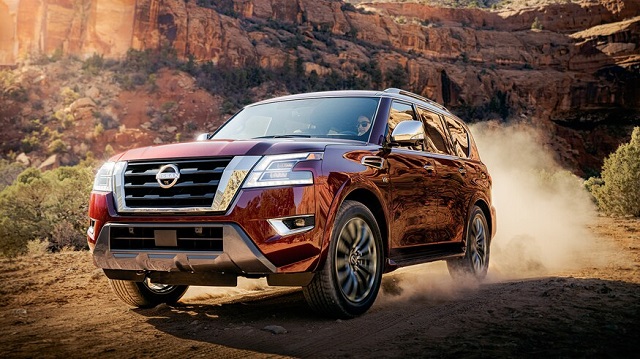 Toyota is a big player in the automotive industry. While models in other classes are dominating the sales charts, Sequoia is the slowest-selling full-size SUV. There is a clear reason – the vehicle is very old. The automotive industry evolves faster, but the Japanese company is focused on other segments. The Sequoia is well-known for its durability, both the SUV and the tree. But, in this case, styling becomes boring. Very boring. Facelifts are not good enough to draw attention.

The good news – the 2023 Toyota Sequoia might be the first model of the next generation. It is about time. The company is developing a new vehicle, which should become a serious player in the US market. A new engine is about to replace a big V8. The TRD Pro version is already there, and there are no doubts the company will carry on with the current lineup.

The company’s longest-serving nameplate. It’s been 70 years since Land Cruiser’s first appearance. During this time, the SUV has been changing a lot. But, the key move happened early in the 80s, when the carmaker split the lineups to utility and luxury. The 2023 Toyota Sequoia closes the gap between the two sectors. But, not good enough – the LC is old, like Sequoia.

The good news is that Toyota is preparing for the next generation. The bad news is the next-gen SUV is debuting after the 2023 Toyota Land Cruiser. And it is not bad because of the waiting. Toyota will discontinue the SUV in the US after 2023 YM. The reason is explained in the next paragraph. So, if you are a fan of the Land Cruiser, you won’t have too much time to get it.

This is probably the main debut on this list. The 2023 Lexus LX 600 is coming as the all-new SUV. The company filed for the nameplate and it didn’t take too long for experts to find out what is going on. Like other big rigs by Toyota (Lexus is owned by the automotive giant), the LX was quite old and needed a redesign. Both its luxury SUVs were two the slowest-selling models in the premium segment. The company made a move – LC is going to be discontinued, and the LX is entering the next generation.

So far, we don’t know too much about it. If we take a look at the rest of the lineup, there is a rule – the number in the nameplate suggest what kind of an engine the SUV is using. Previously, LX570 was using a 5.7-liter V8. A new drivetrain is replacing it. But, the LX 600 makes everyone wonder – what does it mean? A 6.0-liter engine? Or 600 horsepower? 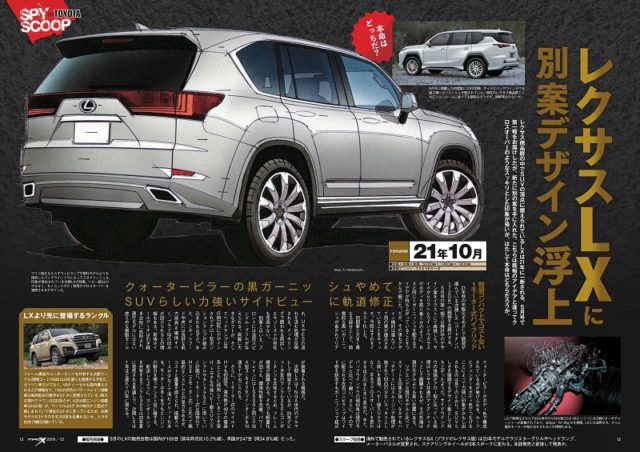 The German carmaker launched the new generation of its largest SUV last year. So, no big changes should be expected on the 2023 Mercedes GLS. Well, the vehicle is already stunning. But, Mercedes-Benz will find a way to make it better. We can be sure the GLS is an expensive choice, with a price starting at $77,000. But, many buyers are not purchasing a model with a V6 engine. An upgrade to the V8 is making the price go up by more than $20k.

The 2023 Mercedes GLS AMG 63 is a star of the lineup. A 4.0-liter turbo engine is producing 605 horsepower and the big rig hits 60 mph in just 4 seconds. The EQ boost is now included in all configurations. But, you can’t expect impressive gas mileage for such a big SUV. The price of a heavily-loaded AMG version is over $135,000.

The 2023 BMW X7 is the freshest model on this list. The nameplate debuted recently. Of course, the German carmaker is making the new rivalry with Mercedes. The X7 was accepted well, and the 2023 YM could bring the first updates. If you ask fans, they will say BMW is going to enlarge the famous radiator grille.

Like Mercedes, the SUV is offered with a V6 in the base form. We’ll skip that one and pick a V8. But, the 2023 BMW X7 M50i is hitting $100,000 price mark. Rival to the AMG will be the Alpina XB7. Two companies joined forces and brought this super luxurious vehicle that will cost more than $140,000. A 4.4-liter bi-turbo V8 is producing 615 hp. The interior will show you why this model is so expensive. 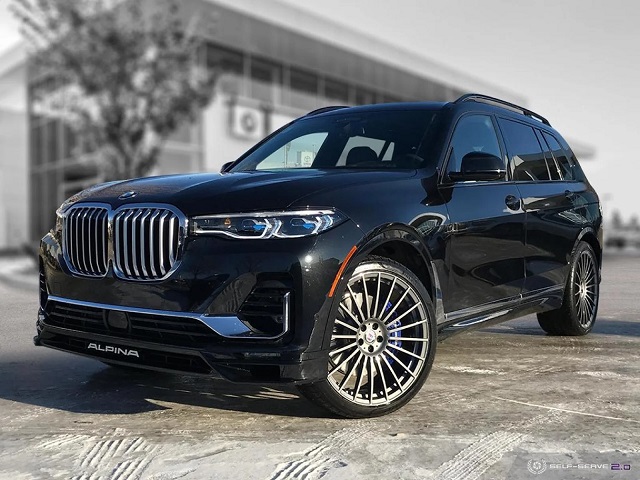 The 2023 Range Rover is the largest model by the JLR group. Like Toyota’s, it is pretty old. But, the British company somehow maintains the level of sales thanks to its fans. This SUV brings a completely different experience and splits the public. You love the Range Rover or hate it. But, the facts are that vehicle doesn’t have too many downsides. The price is one of them. Even the base model with a six-cylinder unit will cost $92,000.