General Motors has a wide choice of crossovers and SUVs. You can find their models behind Chevy and GMC badges, and if you are after a luxury model, then look for the Cadillac. Here, we will go through the 2022 Chevrolet SUVs and crossovers lineup. Find out everything about the favorite model.

Some of the 2022 Chevrolet SUVs and crossovers went through a big redesign recently. But, some changes are possible even on these vehicles. On the other hand, the COVID-19 outburst spoiled release date plans for many GM cars. So, instead of 2021, we will see them refreshed as 2022 models.

We are starting the reviews of the 2022 Chevrolet SUVs and crossovers lineup with the smallest of them. The 2022 Chevy Trax heads toward a new generation. The subcompact model debuted in 2015. Now, it is time for the big redesign. We assume the changes will be inspired by some of the novelties we can find on larger siblings. Chevrolet recently launched fresh versions of Tahoe and Suburban and brought back Blazer. Nevertheless, the update of the 2022 Chevy Trax will heavily depend on the Equinox, planned for 2021 and postponed for 2022.

Under the hood of the upcoming Trax remains a 1.4-liter turbo-four unit. It is capable to produce 138 hp and 148 lb-ft of torque while covering 26/31 mpg. It is a good rating for the city cruising. All-wheel drive will consume more gasoline. A hybrid vehicle is not an option for now. EV comes with the Bolt EUV. Trax is going to cost more after the redesign, starting around $22,000. 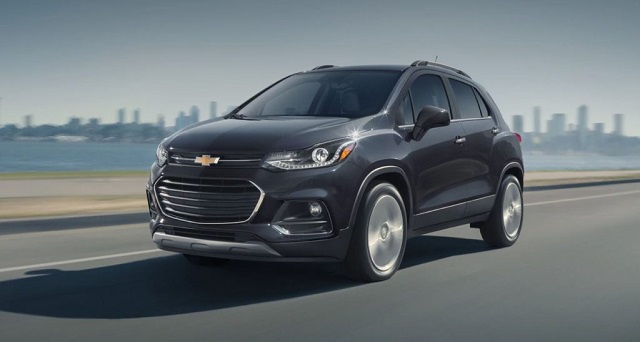 Soon after the release of the Blazer mid-size SUV, the carmaker decided to bring back another nameplate. The 2022 Trailblazer will fit between Trax and Equinox. This is a new class and we can already find Nissan Rogue Sport in the same segment. The Trailblazer is interesting because of open options – the potential SS model. Well, this is not confirmed yet, and experts are still speculating about the Blazer SS, as well as its smaller sibling.

The Trailblazer is an all-new vehicle. After only a season in the market, we cannot expect big changes. Interesting, the base version of the crossover is more affordable than the smaller Trax. The MSRP is $19,000. However, high-end models will exceed $30,000 and the SS will be the top of the class version. We still don’t know what kind of an engine will power it. The base configuration comes with a new 1.2-liter turbo engine, while extra power comes from a 1.3-liter displacement. Both mills are inline-three setups. 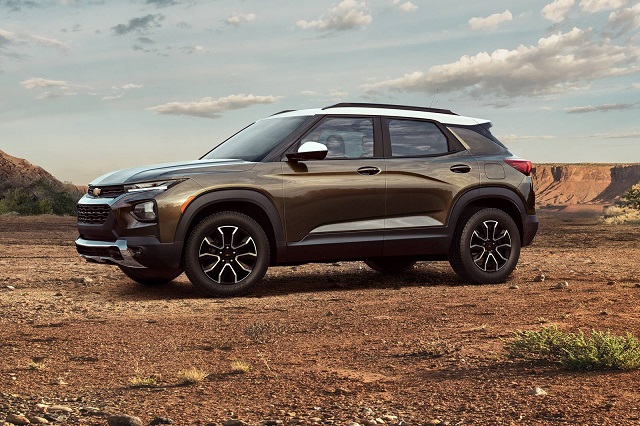 Fans of Equinox are still waiting for the new edition. The crossover was presented early in 2020 as the 2021 YM. But, the COVID-19 outburst made the company postpone the release date with the uncertainty of sales. Now, the Equinox is part of the 2022 Chevrolet SUVs and crossovers squad. The good thing is that we know mostly everything about it. The carmaker had time to add more features. But, it won’t be anything big.

The redesigned 2022 Equinox introduces a new styling. The company also paid a lot of attention to safety. However, the disappointment among fans is huge with Chevrolet again missing on the hybrid version. In the best-selling class, top models are coming with 40+ mpg. General Motors introduced plans for the electric future. But, their vehicles are yet to feature competitive hybrid configurations. 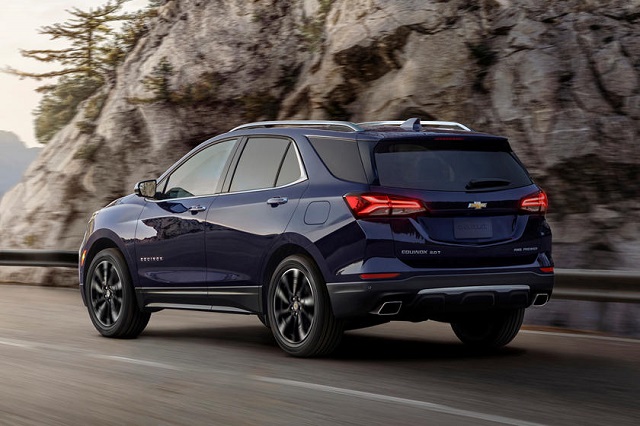 Blazer is going to be a star of the 2022 Chevrolet SUVs and crossovers. This is the all-new vehicle, brought back to fight the new Bronco. It is not an easy task, but the Blazer was the first to be launched. Hopefully, this is not going to be the only victory for the GM over its archrival. A 2.5-liter inline-four is the base engine and creates 193 hp. You can upgrade the ride with turbo-four and gain 34 hp. Buyers are also being eligible to add AWD to this unit. The largest powerplant is a 3.6-liter V6. Again, no hybrid option. A nine-speed automatic transmission works smoothly.

The 2022 Chevy Blazer could add the SS model. The performance-oriented version is a hot topic ever since the comeback was announced. But, the info about upgrades is limited. On the other hand, we could hear similar stories about other vehicles. But, it never felt so close like it is with Blazer. The only other model to wear the SS badge is the Camaro muscle car. In the past, the Silverado truck was also one of the vehicles, and K5 Blazer SS was definitely one of the most interesting units. The price of such an upgrade will add more than $25k over the base price, which sits under $29,000 without the destination fee. 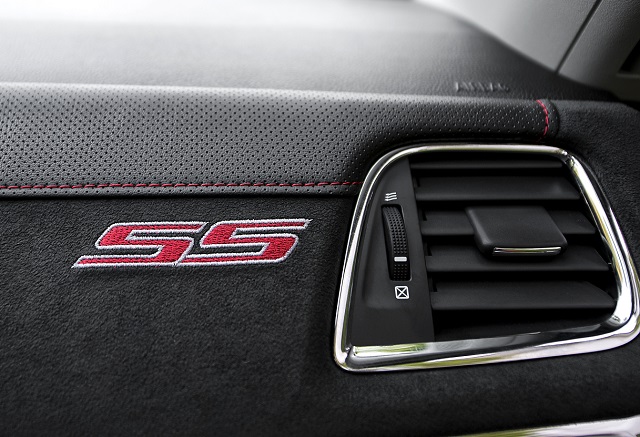 Traverse is the smallest three-row model in this list, for now. The company made some announcements that could change the situation soon. But, until it happens, you will spend the least on this one to get a seven-seater. The 2022 Chevrolet Traverse is in the same pot as the Equinox. The updated model was ready to be launched but became part of the 2022 Chevrolet SUVs and crossovers list. But, it will be worth waiting.

The redesign of the mid-size SUV will be inspired by the latest changes on the Tahoe and Suburban. The 2022 Chevy Traverse is also going to offer plenty of options through versatile trim levels and colors. One of the best upgrades will be Redline Edition, eligible for buyers of Premier package. Changes on the SUV include narrower headlights, larger grille, wireless Apple CarPlay, larger multimedia screen, and more safety features. The price will have a range between $32,000 and $55,000 (High Country). 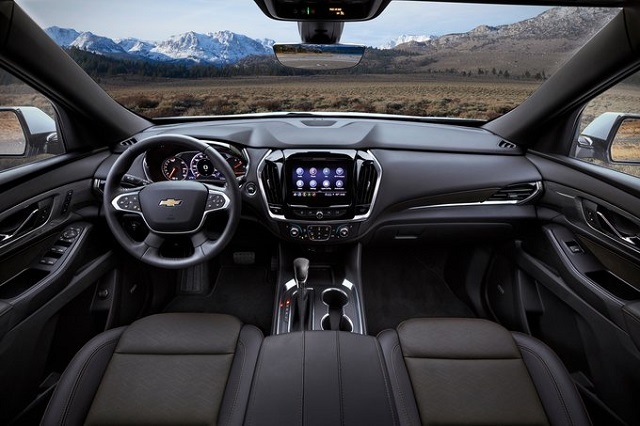 The full-size SUV is all-new and we don’t expect any big change for the 2022 Chevy Tahoe. A V8 engine is standard. Buyers can choose between a 5.3-liter displacement with 355 hp and a 6.2-liter with 420 ponies. One of the options is to see the SS model of the Tahoe SUV. According to some rumors, GM is preparing a supercharged version of the 6.2-liter engine. This one will reportedly debut on the Silverado ZRX truck with 700 hp. The company will probably use it on other big rigs as well.

The 2022 Tahoe is going to be available with the Duramax diesel engine. The base trim level is LS, and you can also upgrade the ride with LT, RST, or Premier packages. For the luxury equipment, buyers will need to splash $70,000 on the High Country version. The 2022 Chevy Tahoe also offers an off-road specialist, the Z71. In this case, you pay $60k to get 4×4 drive, hill-descent control, all-terrain tires, and skidplates with tow hooks.

The Suburban is the long-wheelbase version of Tahoe, rival to the GMC Yukon XL and Ford Expedition Max. Its wheelbase is 134 inches long and the overall size is 225 in. That is 15 inches more than Tahoe. Total cargo space was increased after the update. Now, the 2022 Chevy Suburban can offer 145 cubic feet of cargo space with all seats folded. Behind the rear seats, there is room for 72 cu.ft. These are the biggest changes in the model compared to Tahoe. Enough to be the largest model on this list of the best 2022 Chevrolet SUVs and crossovers.

Suburban is available with the same engines as its short-wheelbase sibling. The price goes up a bit. These 15 inches will cost buyers about $2,000. The change will allow designers to add one more spot, increasing the seating capacity to nine. With ten, a vehicle becomes a minivan.

“Our electric future is now” is the new motto for the GM. One of the first vehicles to be completely electrified is the 2022 Chevy Bolt EUV. This used to be a hatchback, and now the company turns it into the electric crossover. The company is not sharing precise info about the upcoming models yet. But, we assume there will be a few configurations and the Bolt EUV is not going to return less than 250 miles in a single charge. With the hatchback making 259, it won’t be a surprise to see the new model covering 300 miles.

The 2022 Chevrolet SUVs and crossovers are getting a new brother, based on the hatchback. However, the EUV version will be 6 inches longer. Also, the price goes up, fans believe for about $3,000. The Super Cruise system is very likely to happen. The release date of the electric crossover SUV is set for the final months of 2021 and the base price won’t be under $40,000. 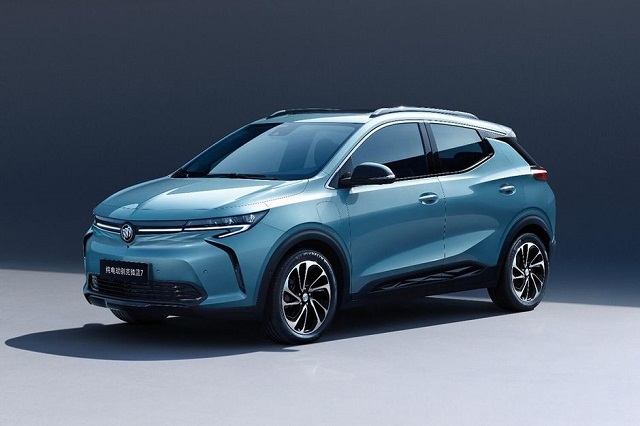 Captiva is the non-US compact crossover. The company launched the new generation of the vehicle in 2019 and limited its market to increase the popularity of Equinox. The 2022 Captiva is available mostly in Asia and it is slotted between Equinox and Trax/Tracker.

In China, you will find the 2022 Chevy Captiva as Baojun 530. A couple of gasoline engines power the crossover. The smaller one is a 1.5 displacement, but it comes with a turbocharger. A larger option is a 1.8-liter naturally-aspirated four-cylinder drivetrain with 135 hp and 137 lb-ft of torque. An oil-burner is available for buyers in India. The 2.0-liter MultiJet II is good for 170 hp and 260 lb-ft.

Finally, the last piece of the 2022 Chevrolet SUVs and crossovers puzzle could be the FNR-CarryAll concept. The vehicle debuted late in 2018 and many experts considers it as the three-row version of the Blazer. The mid-size SUV should be very capable, a kind of a specialist for tough terrains. On the other hand, since it had a premiere in China, it is questionable if the Chevy FNR is coming to the US.

The exterior is inspired by the Camaro muscle car. The fresh design language will also underpin all the future models with the bow tie on the front grille. Everything else is carried over from the Blazer. The concept is 196 inches long, which promises enough room inside the cockpit. The prototype wears 22-inch wheels, leather seats, a large screen, and some other advanced options which will be available on higher trim levels. For now, there are no announcements when GM is planning to produce the Chevrolet FNR CarryAll SUV.

See the entire company’s offer of SUVs and crossovers HERE